The Boxrite system of training has taken years to develop from the experiences of Head Coach Bobby Mayne, initially as a boxer, then judge and now coach. Being involved in the sport at different levels both domestically and internationally, he noticed many inconsistencies in teaching and lack of understanding of basic concepts of technique and body mechanics that was not being corrected which in turn impeded the development of the fighter form achieving their true potential in the sport. The training system devised places much emphasis on teaching and establishing the fundamentals technique and body mechanics, then once the foundation is in place it is then easy to build and develop the fighter to an intermediate and elite level. The success of the Boxrite training system have been demonstrated by Daniel ‘The Rock’ Dawson winning his WBF 154lb world title, assisted Filipino boxers Rey Loreto and Rey Megrino winning their world and regional titles respectively. Competitors from MMA have been successful having trained with Bobby such as top Filipina boxer / MMA fighter Jujeath ’Bad Girl’ Nagaowa who won WBO regional title and both of her OneFC MMA bouts and UFC fighter Brian Ebersole.

Boxrite places much emphasis on self-discipline, commitment; dedication and consistency towards training these core values are transferrable for success in other activities in life either at work, study or with family commitments.

Train to your ability and learn the art of boxing.

Content of Seminar Tailored to suit your needs choose from topics below: 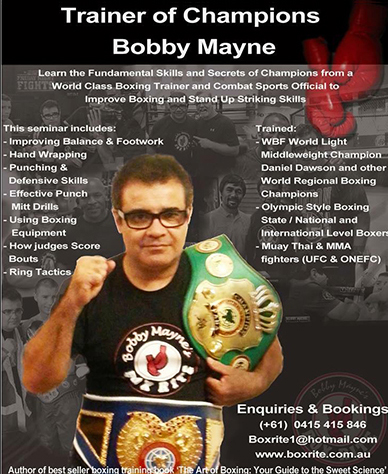